Wednesday 27th to Saturday 30th May

To view photographs from 2015’s production of Hamlet, either watch the slideshow below or go to Flickr. 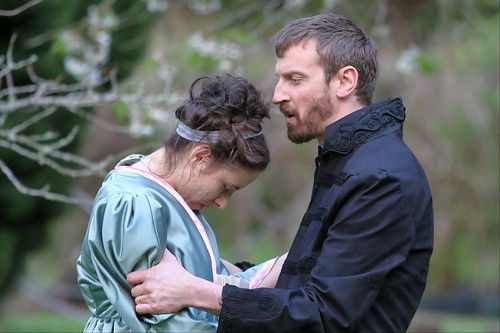 Videos of The Comedy of Errors are available on YouTube. Watch them below or go to the Hamlet Playlist.

“Who’s there?” asks Bernardo. So begins Hamlet, William Shakespeare’s seminal masterpiece. To put the power and passion of this play into context, you must only consider this: Most scholars agree that Shakespeare is mankind’s greatest writer. If this is the case, it begs the question, is Hamlet the best piece of literature ever written? Now, you can decide. In Shakespeare: The Invention of the Human, Harold Bloom claims ‘After Jesus, Hamlet is the most cited figure in Western consciousness’.

Hamlet is a behemoth of a play, and is considered by many to be his finest work. This is one of many reasons that Shakespeare at Traquair’s very own Steve Russell chose to tackle it to celebrate the company’s 20th Anniversary. The play is huge. Its original run time is around the five hour mark. Russell has been working on re-drafting the play for the past 18 months, cutting it down to a manageable 2 ¼ hours. Perhaps even more impressive than this achievement, is the fact that Director, Steve Russell, has managed, not only to reduce it in length, but to retain the essence of the play, the workings which make it a masterpiece.

Director Russell first was drawn to colours, and following his desire to see the play explode with a vibrant array of colours and textures, he chose to set it around the time of Waterloo, 1815. To those unfamiliar with the brilliance which is Hamlet, allow us to give you a brief synopsis in the hopes it may whet your appetite and ignite a burning desire to witness it brought to life in the wonderfully expressive and atmospheric surroundings of Traquair House.

On a gloomy winter night, the ghost of King Hamlet walks Elsinore Castle in Denmark. Horatio and the watchmen bring Prince Hamlet to see the ghost of the dead King, who tells him, ‘thus was I, sleeping, by a brother’s hand, of life, of crown, of queen, at once dispatch’d: Cut off even in the blossoms of my sin’. As the ghost vanishes with the breaking dawn, he orders Hamlet to seek revenge.

Despite his devotion, Prince Hamlet is contemplative and thoughtful, and thus does he delay, entering instead into a deep melancholy and the image of madness. Rosencrantz and Guildenstern are employed to watch him, and despite believing Ophelia the cause, there is no evidence of this following Claudius’ spying.

During the ‘play within the play’, when the actors re-enact what Hamlet believes has happened, Claudius leaves, cementing his guilt. Despite Hamlet happening on Claudius praying – the perfect time to kill him – his doubts prevent him doing so, his soul desperate for more. Following the mistaken murder of Polonius, Claudius orders Hamlet banished to England, accompanied by Rosencrantz and Guildenstern who have sealed orders he is to be put to death. Heartbroken, desolate and broken by grief, Ophelia, embraced by madness, drowns in the river.

Laertes, Polonius’s son, returns to Denmark, and is convinced, by King Claudius, that Hamlet is to blame for the tragedy that is the death of his father and sister. Following an attack by pirates, Hamlet is forced to return to Denmark, upon which Claudius conducts a plan which will use Laertes’ desire for revenge to secure Hamlet’s death.

In a duel complete with poison and treachery, the climax of the play unfolds, and the characters’ lives are shattered in a deluge of bitterness, betrayal and revenge.

Some of the cast of Hamlet attended stage sword fighting workshops run by Joel Mason.