Article in the Southern Reporter.

Videos of our production of King Lear have been added to YouTube. Watch them below or go to the King Lear Playlist on YouTube to see all the videos.

Look through photographs from the performances and rehearsals of King Lear.  Click on a photograph to view a larger version or go to Flickr. 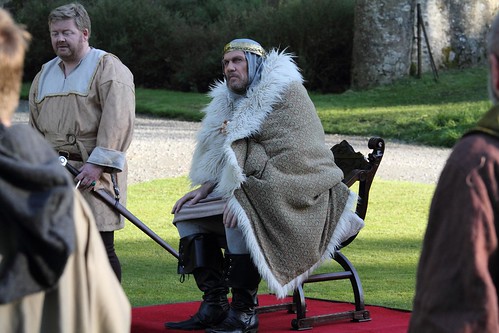 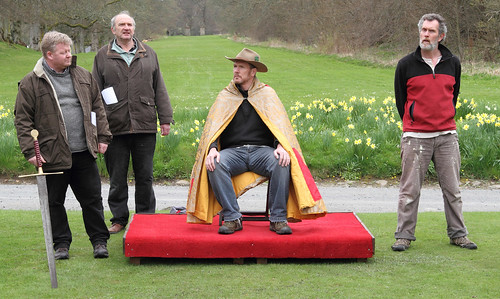 Traquair House is the most wonderful setting for Shakespeare, with a breadth of history that is hugely inspiring for the production team.This year, as on previous occasions we have drawn on this for the look of the play. King Lear is set in the 11th century contemporary with the origins of the house which was then a royal hunting lodge in the ancient Ettrick Forrest and although the house has evolved greatly since that time leaving scant visible evidence we have been able to recreate a sense of the period from other sources such as the Bayeaux Tapestry and other Anglo Saxon art and artefacts.

A Play For Our Time

King Lear is a fast-moving, action-packed family tragedy. It is often considered to be the greatest play in the English language. Shakespeare’s intertwining plot strands are drawn from folk tales, from ancient British history, and there are even echoes of the great Oedipal tragedies of ancient Greece which were so important to Freud, and the formulation of psycho-analysis.

This play is about a King, and his kingdom. But it is equally a drama about family life and responsibility, about mental helplessness and disintegration. It is about children and parents who want the impossible from each other. So what’s new, you may say this is starting to sound familiar. And perhaps it is because the play is about family life, and is easy to relate to, that its tragic intensity is famously hard to bear. For a long time King Lear was staged with a non-Shakespearean happy-ending. In our time, the unexpurgated version has been re-instated. But the profound darkness of this modern/ancient play, laced with snatches of traditional song, proverb and nursery rhyme, is shot through with flashes of lightness and touches of humour.

Our promenade performance is set in a remote Kingdom of Scotland c1200. It will incorporate music and voice-percussion, composed by Chris Dubé and devised with the help of a Chorus.