The Princess of France and her fellow plotters

We have just completed a successful, if somewhat damp, production of Love’s Labour’s Lost. Thank you to all the audience who turned up in rain and shine. Also thanks to our fantastic cast and crew for a great show, despite the elements.

Love’s Labour’s Lost was Shakespeare at Traquair’s main stage production for 2019 and was directed by Tim Wilcock. The play sees self-denial in fashion at the court of Navarre where the young king and three of his courtiers forswear all pleasures in favour of serious study. But when the dazzling Princess of France and her entourage arrive, inconvenient promises are quickly ditched in favour of some ham-fisted wooing. It’s a boisterous send-up of all those who confuse fantasy with reality and Shakespeare displays just about every weapon in the playwright’s arsenal, from excruciating cross-purposes and impersonations to drunkenness and bust-ups. A feast of language, replete with puns, rhymes and grotesque coinages, this is being staged as a high-energy, tightly choreographed piece of theatre.

The wonderful Garden Café in the 1745 Cottage Traquair offered  a delicious pre-theatre supper just seconds away from the start of the play. The menu can be viewed here and if you would like to book a table for a future meal, please phone 01896 830777.

Photographs from the dress rehearsal and the performances are now available on Flickr. You can view them using the slideshow below or or go to Flickr. 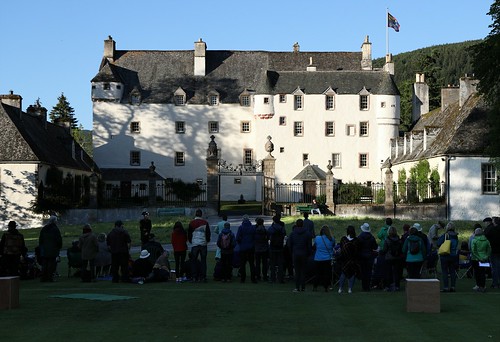 Click on the arrows to scroll through the images and click on a photo to bring up a larger version.

Download a PDF file of our Love’s Labour’s Lost poster.

elcome March with wintry wind, would thou were not so unkind” goes the couplet in that famous Flanders and Swann homage to the British weather.  Having moved rehearsals outside at the start of the month, there are now around forty members of cast and crew who’ve experienced the vagaries of acting in the great outdoors, from spring sunshine through to howling gales and a blizzard on our second outing that forced a retreat to the warmth of the Walkerburn Village Hall.

But the show is storming ahead with everyone pitching in with ideas and committing themselves to their parts with commendable professionalism.  We’ve now got what can only be described as some spectacular physical theatre as Costard tries to woo Jacquenetta in his own inimitable style (hats off to Arran Houston, Ayla Tennant and Emily Hamilton for their creative interpretation of my somewhat loose description of what I was looking for).  The wonderful Rose Ruiz Daniels is bringing real Spanish flair to the malapropism prone Don Armado and Boyd Wild has equipped Dull with what can only be described as a resonant Birmingham twang.

Credit is also due to the nine lead roles as they combined to produce a bravura performance last week without scripts!  This must be some sort of a record for a Traquair production – pretty much everyone fluent before the end of March!

All we need to do now is persuade the paying public to roll up and watch what looks like it’s going to be a show that will linger long in the memory, hopefully for all the right reasons.   Flyers and posters are now to hand and will be unleashed on unsuspecting punters now that Traquair House and gardens are officially open after their winter hibernation.

So, if you’re a prospective audience member reading this, it’s never too early to book tickets! Show dates are 29th May – 1st June and 5th-8th June, 7.30pm each night! Our booking agents, Eastgate Theatre, will be happy to take your call on 01721 725777.

Five weeks into rehearsals and things are going worryingly well.  Cast are learning their lines and their moves, people are sewing away furiously and there’s an army of “Blue Peter” experts crafting props of varying sizes and shapes.

A minor perturbation resulted in our losing our leading man before the first rehearsal (for all the right reasons – Mike Boyd got a job offer he couldn’t refuse, but it meant he wouldn’t be around for the second week of the show which presented a minor complication) but David Bon has stepped in and is displaying all the regal charm required of the King of Navarre as well as choreographing one of the most energetic Cossack dance routines you’re ever likely to see in Scotland.

The cast have got as many moves to learn as they have lines but the physical theatre is coming along apace and adds energy and humour to the piece, as well as ensuring that the fabled fourth wall gets broken at every opportunity.  The slapstick between Costard and Jacquenetta is keeping everyone involved on their toes and Don Armado and his faithful retainer, Moth, are going to go down a storm once they get an audience to work with.

Rehearsals move outside in March, which will probably be enough to generate another “beast from the east” but it will take more than a few flakes of the white stuff to stall the progress of what looks like it’s going to be a humdinger of a show.

So, if you’re a prospective audience member reading this, it’s never too early to book tickets! Show dates are 29th May – 1st June and 5th-8th June, 7.30pm each night! Our booking agents, Eastgate Theatre, will be happy to take your call on 01721 725777.

The auditions for our 2019 production of Love’s Labour’s Lost are now done – the main play is cast and rehearsals begin on Sunday 20th January and I’m now frantically juggling names and parts to accommodate the gold mine of talent that emerged at a very noisy and boisterous young actor audition last weekend.

I’m absolutely delighted with the quality of actors that have agreed to take a part in what I hope will be a production that will live long in the memory – for all the right reasons. The aim is to immerse the audience in the play by setting it “traverse style”, making sure we set the audience around three sides of a square for pretty much every scene and then have actors disappearing into and emerging from the assembled throng watching the performances. And, in addition to the verbal badinage, there’s a lot of physical comedy to get our heads around as well as several pieces of slapstick which will generate plenty of laughs but tend to take rather a lot of time to perfect!

We’ve got a show full of fun and energy and one that is sure to get the audience laughing along with us. And, if you’re a prospective audience member reading this, it’s never too early to book tickets! Show dates are 29th May – 1st June and 5th-8th June, 7.30pm each night! Our booking agents, Eastgate Theatre, will be happy to take your call on 01721 725777.

Adult auditions were held in December 2018 and a children’s audition workshop in January in Walkerburn Public Hall. Here are a couple of photographs from the adult auditions.