Hermione (Leah Moorhouse) is helped to leave by Paulina (Carol Norris) after finding out that her son is dead.

In 2017 we performed The Winter’s Tale, which was directed by David Bon, who has acted with the group since 2007 and previously directed The Comedy of Errors in 2014.

Videos of The Winter’s Tale

Click on the above photograph or this link to view the photographs on Flickr, or view the slideshow to the right. 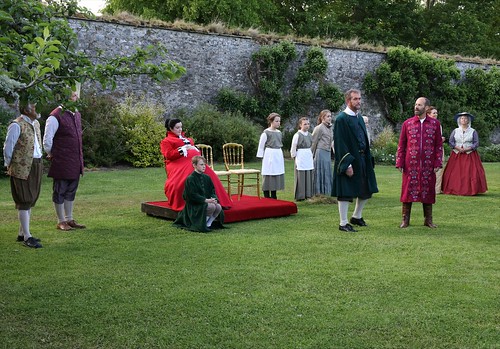 One of Shakespeare’s last plays – indeed some think it may have been the last play he authored himself – the storyline might not be too familiar to audiences. Two close childhood friends – Leontes and Polixenes – have grown up to rule in their respective kingdoms of Sicilia and Bohemia. As the play begins we find Polixenes visiting Leontes in Sicilia and the two friends have been enjoying each other’s company and catching up on old times. When Polixenes decides to return home to tend to his kingdom, and his son, Leontes’ tries in vain to convince him to stay. At his prompting his wife Hermione succeeds where he has failed and from there the fates of the characters within the court are driven by the kings’ paranoia, jealousy and accusations of infidelity and betrayal. In this claustrophobic and stifling atmosphere the fortunes of all concerned spiral downwards into tragedy and death. Fittingly perhaps for Traquair, the mood of the play then takes an upward turn following one of Shakespeare’s most famous stage directions – ‘Exit pursued by a Bear’.

The title of the play firmly places this within the realms of popular story telling. Shakespeare’s original audience would have been familiar with the expression ‘a winter’s tale’ meaning a tall tale used to entertain children or gull fools. This play is very self-conscious and knowing and it plays up to its improbabilities.

One of the challenges we almost always face is the lack of female characters within these plays. Whilst it’s an inevitable consequence of the very different world in which Shakespeare lived and the theatre which he was writing for, it’s always a frustration that we don’t have enough roles to offer all the great female actors within the group. Fortunately ‘The Winter’s Tale’ has several leading female roles and includes, in my opinion, one of Shakespeare’s best written and most fully developed female characters – Paulina.

In her we come across a strong, intelligent and witty character, who can hold her own in a male dominated world but does so without having to act like a man. There is a familiarity and boldness in the way she interacts with Leontes. She confronts her King and challenges his behaviour in a way that no-one else in the court dares to do. This hints at a history in her relationship with Leontes, which is unspoken in the play but that I’m really looking forward to developing in rehearsals.

Actor’s Thoughts about The Winter’s Tale

We will be posting a series of videos which follow the process of putting the Winter’s Tale together. Members of the cast will discuss their thoughts about the play, Shakespeare’s motivation for writing it and the relationships between the characters. Rehearsals began indoors, before moving outside to Traquair House when the weather “warms up”. Well, when it hopefully warms up!

Leah Moorhouse (Hermione) and Scott Noble (Leontes) discuss their thoughts about the play and Shakespeare’s motivations for writing it. This is the first part of a longer interview.

Leah and Scott discuss their their characters. This is the second part of a longer interview.

Leah and Scott conclude their discussion by talking about the relationships between characters in The Winter’s Tale. This is the third part of a longer interview.

Leah discuss the play, their initial thoughts on the play, the characters and their relationships. This is the complete version of the interview.

Rehearsals  moved down to the beautiful grounds of Traquair House and we join Leah and Scott and also Carol Norris, who is playing Paulina. All three discuss Paulina, who is one of Shakespeare’s more interesting, independent and emancipated female characters.

Read Kath Mansfield’s blog, one of our actors and directors, which includes a link to Jo Bell’s advice on submitting poetry to publishers.