When invited by the Peebles Arts Festival Committee to contribute to this year’s programme, it seemed appropriate in the tenth anniversary of The Eastgate Theatre to re-produce Shakespeare’s Canon (performed 26 and 27th March 2004). Written by local playwright and former teacher, Douglas Roberts, it is far from the soul-destroying, school Shakespeare many of us endured: more Blackadder, Horrible Histories, House of Commons. Written before Shakespeare in Love, that acclaimed film and now, very recently, hugely successful stage play in London, Roberts was a bit before Tom Stoppard’s thinking.

In both, Shakespeare has a terrible case of mind block. In Shakespeare’s Canon Roberts has two characters as his leads but Shakespeare cannot quite place them in any of his current plots. These two characters, made famous in a previous Stoppard play, go through the highs and lows of meeting Hamlet, Titania, Oberon, Miranda, Macbeth, Witches and Fairies, sea storms, shipwrecks and trees. TREES! Oh, and not to forget death. Wait until the end and all are dead! There are no dogs in this one – so pet lovers have no fear. And NO TWINS! Shakespeare himself is on stage the entire time. Well in this instance herself; a female Shakespeare in the pint-size of Anna Tweedy. Don a moustache who would know? Kind of ironic considering females were banned from acting in Shakespeare’s time. Why didn’t James I, when he made Shakespeare’s troupe, the King’s Men, commission several portraits of the man and several biographies and maybe an autobiography? It would have made today less populated by fat academics debating who he was and how he looked . Maybe Shakespeare WAS a woman! Willhelmena!

As ten years ago, this production is directed by Kathleen Mansfield and performed by some of the committed youngsters. From the first performance of Shakespeare at Traquair, 20 years ago, the youngsters are the heartbeat: the raindrops that made a sea. Their energy will take you into the mind of that well-known, but so elusive writer, Shakespeare. It will prove a wonderful journey. Start with the short walk or drive to the Eastgate or Carlops Village Hall and enter that place of imagination. We believe you will enjoy yourselves.

See photographs and details of the 2004 production. 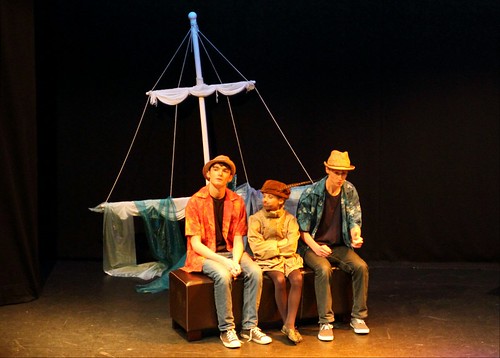 View highlights of Shakespeare’s Canon below or go to YouTube.