Look through photographs from the performances of Othello. 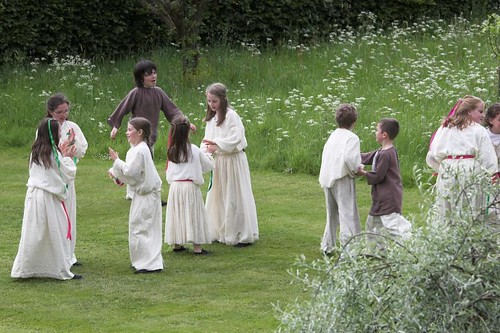 The action takes place at the beginning of the 16th century, and is based in Venice and Cyprus during the rule of the Venetian empire. Othello is a Moor, and a renowned general of the Venetian army, who at the beginning of the play has secretly married Desdemona, the daughter of a senator called Brabantio. Brabantio is furious when he finds out about this, as he does not consider a Moor as a suitable match for his daughter.

He is informed of the wedding by Iago and Roderigo, who both have a vested interest in fuelling Brabantio’s anger. Roderigo is in love with Desdemona, and hopes that he might be able to help sever the union with Othello. Iago is the true villain of the play, and is insanely jealous that he was overlooked by Othello who favoured Cassio to the appointment as his lieutenant. He is also suspicious that Othello may have had an affair with his wife Emilia.

Iago plots the downfall of Cassio and Othello, using Roderigo along the way. He does this by gradually working on Othello to persuade him that Cassio and Desdemona are having an affair behind his back. He deliberately gets Cassio drunk, and manoeuvres the situation to make him disgrace himself publicly. Othello dismisses Cassio because of this, appointing Iago in his place. However, Iago is not satisfied with this alone, and continues to plot. He works on Desdemona to try and persuade Othello to reinstate Cassio. At the same time he suggests to Othello that her pestering on Cassio’s behalf is actually a sign of her infidelity. Desdemona is completely innocent and naive, and does not realise that her over-zealous petitioning for Cassio could be so interpreted.

Iago has a stroke of luck when a handkerchief, a very special gift from Othello to Desdemona, falls into his hands. He knows that this has a very intimate and special meaning for the couple, and when his wife Emilia finds it and gives it to him, he is quick to use it effectively. He arranges for it to be dropped in Cassio’s room. Cassio finds it, and gives it to his mistress Bianca to make a copy of. (Bianca is a “lady of the night” with whom Cassio has an on-going relationship).

Iago engineers a meeting with Cassio, with Othello listening in from a hiding place. At this meeting he gets Cassio to talk in very bawdy terms about his relationship with Bianca, and suggests that she is a nice strumpet, but certainly not worthy of marriage. Iago has manipulated the start of this conversation so as to make Othello think Cassio was actually talking about Desdemona. This deception is cemented when Cassio produces the handkerchief.

The die is now cast, and Othello is convinced that Cassio and Desdemona are lovers, and that they must both die. Iago agrees to help by ensuring that Cassio meets his death. He arranges for Roderigo to do the deed, persuading him that it would leave the path open for him to gain Desdemona’s hand. Roderigo bungles the attack, and is wounded himself. In the confusion Iago tries to rectify the situation and stabs Cassio, but only succeeds in wounding him in the leg. Iago realises that Roderigo could easily expose him, and so uses the turmoil around the attack to kill him.

Meanwhile, Othello determines to carry out his own part of the deed, and smothers Desdemona. He is discovered by Emilia who is horrified, and calls everyone else to witness what has happened. Inevitably the full story emerges, and it is Emilia who delivers the damning evidence of what actually happened with the handkerchief. Iago is exposed, and in his fury stabs Emilia, and tries to escape. He is caught and dragged back, where Othello attempts to kill him but is disarmed. Finally, distraught at the enormity of his mistake and what he has done to the one he loved, Othello takes his own life.

Cassio survives, and becomes the commander in Cyprus. Iago is a prisoner, and is promised a painful and grisly end.

Retirement is one long rehearsal

Othello Director, Tom Hudson, has been busier than ever since retiring to Peebles six years ago. He tells us why he loves living and volunteering here in Peebles.

I arrived in Peebles in 2003, having retired from being a primary school headteacher in Colchester. My wife was born in Peebles, my mother was Scottish, and Mary and I had always wanted to come here to live. Prior to this I had studied Shakespeare at school and college, but never been involved in staging any of the plays. It was the advert for auditions Shakespeare at Traquair’s The Merchant of Venice five years ago which attracted me, and I have been in each of the productions since. My first directing role was The Tempest two years ago.

Peebles is a fantastic community, and I have really enjoyed getting involved. Drama opportunities abound, and I love being in plays with Shakespeare At Traquair, Tweed Theatre, and more recently Odd productions.

Othello is a very different play to the ones we have performed at Traquair over recent years. It is, of course, a tragedy and yet, like so much of Shakespeare’s plays, it still resonates today, and we can identify with its themes and portrayals of human frailties. It is essentially about jealousy, and how it can corrupt and poison even the most devoted relationships. Iago, the villain of the piece, is jealous of Cassio being given the senior role he thought was rightfully his. His anger is turned against Othello, who had appointed Cassio. To add spice to his jealousy he also suspects that Othello may have had an affair with his wife. He plots the downfall of both Cassio and Othello by poisoning Othello’s mind with the idea that Cassio is having an affair with his new bride Desdemona. Falling for this Othello becomes insanely jealous, and destroys the thing he loves most, before seeing too late in the day that he has been tricked.

It is a powerful and emotional play with a timeless and universal meaning. It also has its lighter moments. Traquair is a unique setting for Shakespeare, and we make no apologies for adapting the plays to suit this. For a start, the time has to be reduced, and making cuts to Shakespeare is a real challenge to directors, and many beautiful lines have to be left on the cutting room floor. The alternative would be an exhausted audience groping their way to Act 5 at midnight!

Introducing children to the love of Shakespeare is hugely satisfying

A wonderful part of each production is that of the children, who have an enthusiasm and vitality which the adults love working with. Fitting them into Othello was also a challenge, bearing in mind the nature of the plot. The older ones will be taking part in the plot as officers and attendants to the principles, and the younger ones have been woven into other parts to enhance the experience for the audience. They will be dancing, playing games, and providing pre-performance entertainment as well. It is brilliant to see youngsters enjoying Shakespeare in the best possible way – by being part of a production.

Music is also an important part of Shakespeare At Traquair, and we have include a number of opportunities for it to play a part in Othello. Moving the audience around is of course an essential element of promenade theatre, and we have worked out some interesting ways of doing this both effectively, and in an entertaining way, using music and the children.

Rehearsals are well under way, and we are soon to start on the phase of refining the acting, and incorporating the children. Tom Hudson and assistant director Fiona Forsyth (left) discuss
the actors’ moves in the Gardens of Traquair House. The weather has been kind to date, but the seasoned campaigners know that fortitude will be needed at some stage to bash on through inclement conditions in order to peak at the right time. It is all part of what makes a Traquair production something unique and very special. Coming back to the community theme, I must add that it is the terrific bond of teamwork which gives the energy to this annual event. There are over 100 people involved one way or another – costumes, make-up, publicity, communication, technical support, props, set production, music, dance, front of house, prompting – they all work together like a family, and generate the spark which drives us all.

Wearing my other hat, it has been a great pleasure to be a driver and trainer with Tweeddale Community Transport, which has brought me into contact with a wide range of really interesting and friendly people. I think it is fantastic for the town to have its two vehicles for community use, and it is good to see them so well used.

I am also involved is with Home Basics, the furniture re-use charity based in Walkerburn, and now with a Lottery-funded base in Hawick as well. This is such a terrific idea, whereby people donate unwanted good quality furniture which is collected and stored by Home Basics, who then make it available to those referred via various social agencies. The surplus is sold off to the public to help meet running costs. Like all charities it is heavily reliant on volunteers, and anyone who feels like helping should contact Ruth at Walkerburn.

I still do a bit of supply teaching around Peebles and beyond, and enjoy getting back into the classroom. I still feel driven by the challenge of teaching, and occasionally wish I was back in the mainstream searching for the answers to achieving excellence for all that teachers constantly aspire to.