Kath Mansfield is directing Romeo and Juliet in the stunning grounds of this ancient house. Kath has cut her teeth at Traquair and has appeared in numerous previous Shakespearian performances. She has experience of directing for Odd Productions and Stagecraft and is looking forward to the challenge of staging Shakespeare in the open air. Moreover, she is hoping for balmy weather!

Look through photographs from the performances of Romeo and Juliet. 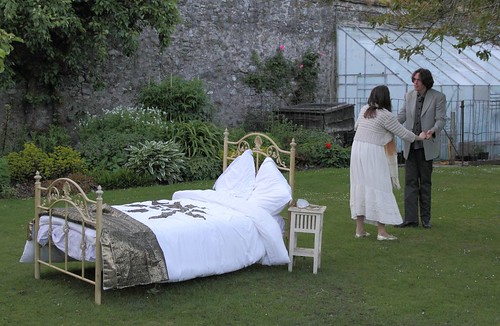 Download a PDF of our Romeo and Juliet 2011 poster

Everyone knows the story of Romeo and Juliet, the star cross’d lovers. It is a feature of life, no matter what the era, that people fall deeply in love with the “wrong” people. And so, in Shakespeare’s beautifully poetic words, we can follow the inevitable tragedy which society forces on these innocent, young and optimistic lovers.

Shakespeare alludes to Fate as being responsible for the tragic demise of Romeo and Juliet, but the structure of the society in which they live is equally at fault. The meddling intervention of both the Nurse and The Friar (here beautifully played by a modern-day female minister) takes some beating in terms of responsibility, as does Capulet’s insistence on marrying his child “well” so very quickly. Moreover, Mercutio cannot remain blameless for his heady readiness to scrimmage and scrap simply to liven up a hot afternoon.

Performing outdoors, amid the beauty of Traquair, this tale of woe, is rendered tranquil, funny, entertaining and touching as the audience follows the action around the grounds.

Shakespeare at Traquair’s latest production, Romeo and Juliet, is now endorsed by the Royal Shakespeare Company as part of its Open Stages project.

“This is terrific news for the group and the Scottish Borders,” Kath Mansfield, this year’s director, told us. “It is a wonderful acknowledgement of all the enthusiasm, dedication and sheer effort it takes each year to produce a quality production in your spare time. Our productions attract a large following and we are careful to maintain standards. Perhaps it is because we are a group with high standards, all pulling in the same direction, that it is so hugely enjoyable. I look forward to the four or five months spent doing the project each year. I always think that if the group enjoy the project, then that enjoyment transfers to the audience.”

This is Kath’s first time as a director for the group. She has previously acted, publicised plays and played costume mistress. Her directorial decision to make Friar Lawrence and Prince Escalus both female, has softened the characters and works extremely well. Rosemary Donald plays the well-meaning but smug Friar Lawrence and Carol Norris is the ineffectual Prince whose family is caught up in the violence of the Capulet/Montague feud. Veteran, Richard Nisbet, is delighted to play Mercutio against a schoolboy Benvolio (Callum Forman). This reflects the concept of families feuding and bonding: Mercutio is teaching Benvolio how to be a man. Mansfield has chosen to play up the comedy of the script: “Although it is a moving tragedy, Romeo and Juliet has lots of laddish comedy and lightness.”

The group has grown and developed over the last sixteen years. What began as a fundraising project for the Eastgate Theatre in Peebles, now has participants as far afield as Livingston, Edinburgh, Melrose and Kelso. Around a hundred cast and crew work together to bring an eight-day run of a Shakespeare favourite to the Scottish Borders each June. The plays are renowned for their entertainment value and the setting is superb. Romeo and Juliet runs from 1-4 June and 7-10 Traquair House, Innerleithen.

Youths rioted fiercely at Traquair House last weekend. The violent rabble, made up of Francescas, Robertos and Luigis, hurled sixteenth century insults and fell upon each other with vicious blows. The June production of Shakespeare’s Romeo and Juliet is their excuse. These kids are creating a cosher criminal setting for the feuding families to tell their tale.

The forty plus youngsters range from six to sixteen. They stage fight, insult one another in Shakespearian language and incorporate a smidgen of Italian into their patter. Director, Kath Mansfield, is delighted with the young cast: “They are such a lovely rabble of kids. They listen and they do as requested, unlike their characters. I am so pleased with them. That is probably down to previous directors at Traquair training them to understand the demands of outdoor performances.

“Incorporating youngsters into Romeo and Juliet gives a clear background of family involvement. The play is about feuding families, so ages six to sixty plus is perfect. These youngsters get involved in the street brawls and witness murders. It is what still happens in the more corrupt neighbourhoods and dangerous ghettos of our beautiful, but imperfect, world. I am very lucky to have a cast of over sixty to create this atmosphere.”

Romeo and Juliet (Matthew Burgess and Natasha Stiven) have begun their romance already – well, begun the rehearsal process for Shakespeare at Traquair’s June production, in any case.

“Both young actors are truly impressive” says Director, Kath Mansfield, “They are experienced professionally and came through the community theatre route so understand how a group like Shakespeare at Traquair works: sometimes it is a fast process and, at other times, it takes patience while fledgling actors learn the trade from more experienced members of the cast. I am delighted that Matthew has agreed to mentor Callum Forman this year, our young Benvolio”.

Natasha has just finished playing Lucy Westerman in Liz Lochead’s adaptation of Dracula and was busy in the Fringe last summer, playing Anya Ranevskaya in an Edinburgh Theatre Arts production of The Cherry Orchard.

Matthew is a well-kent face in the Borders, having been in several Shakespeare at Traquair productions already. He told us: “I am the regular Stage Manager for Borders Youth Theatre where I also help train the youngsters in the ethics of the trade. I am on the board of the Rowan Tree theatre company and for them, I played Wilfred Owen and I had the lead in John Carnegie’s critically acclaimed adaptation of James Hogg’s Confessions of a Justified Sinner.”

He is proud to have been part of the original S@T way back in 1995 (when some the current cast were just a twinkle in the stork’s eye). This is his 7th production and his 1st since the 10th anniversary where he played Nick Bottom in A Midsummer Night’s Dream.

He says that while walking around the picturesque grounds of Traquiar with a script in his hand it all came flowing back and he cannot think of a better setting for Romeo and Juliet than this. Having played Tybalt in another production and having Stage Managed another two productions of Romeo and Juliet, he is quite glad, and surprised, to be playing Romeo at the tender age of thirty-something.