The Merchant of Venice

Look through photographs from the performances of The Merchant of Venice. 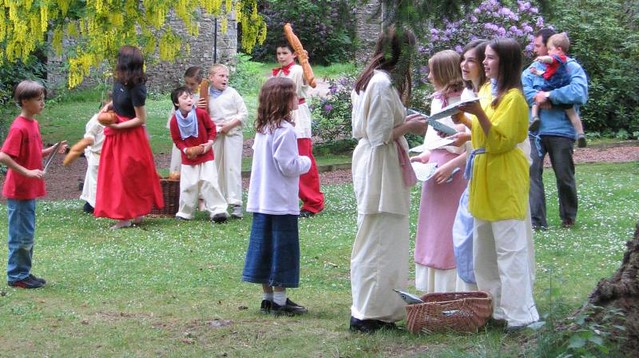 The Merchant of Venice

Children, teenagers and parents from Centrestage Drama club’s West Linton groups met at Traquair House last Thursday to see Shakespeare at Traquair’s latest production, The Merchant of Venice. From the very start audience members were in the middle of the action as the play kicked off with a busy Venetian marketplace. The traders, most of whom are children themselves, shouted and argued in Venetian as the children from the audience sampled goods and tried to haggle. As the story got underway a group of younger children at the front of the audience were surprised to find themselves used as props as the Players conversed, joked and greeted each other. This was, as always, a superb experience of Theatre and of Shakespeare for all of us who were there.

“For me there is perhaps nothing that characterises the best of arts and culture in Peebles more than the performances of Shakespeare at Traquair house. What started off as a fund raiser for an Arts Centre by Under One Roof has turned into an annual event which brings the quirks and charms of the stately home alive and the delights of William Shakespeare to actors and audience alike, while also delivering a stunningly good performance.

“The Merchant of Venice, was no exception in its embrace of the play, and succeeded once again in inspiring both the cast and the audience. The roles of the main characters, particularly Shylock, were very strong, which is clearly a credit to both actor and director. The acting and audience interaction noticeably improves every year. Indeed, one of the most fascinating aspects has been to see the same core of dedicated actors develop over the years to the current level.

“This year, the production as a whole felt more established and confident. There was less effort to enchant the audience with impressive scenery and dancing fairy-like children in the interval, and a more concentrated and minimalistic focus on the performance itself. Whilst this was effective, I did feel that there was a loss of interaction with the grounds. Where in the past scenes have been daringly set in the more magical parts of Traquair, this year less exciting areas were utilised, which did little to enhance the play when compared to past performances.

“While there was a loss here, I believe that it was a partly result of the more adventurous and challenging choice of play for this year’s production, a fact which in itself is a tribute to how far the team has come. Overall this was yet another refreshing and enjoyable performance to add to a legacy of such productions, and it leaves me eagerly anticipating news of next year’s presentation.”