Scotland on Sunday review of The Merry Wives of Windsor.

This professionaly produced video includes interviews with the director Richard Forsyth and also some of the children, who play such an important part in our productions. View on YouTube.

Look through photographs from the performances of The Merry Wives of Windsor. 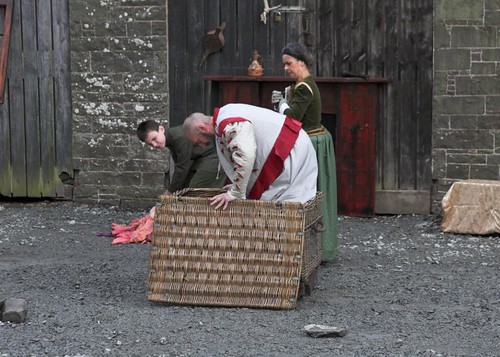 The Merry Wives of Windsor

This year’s Shakespeare production at Traquair is one of the most popular of Shakespeare’s plays on the modern stage – ‘an excellent and pleasant conceited comedy of Sir John Falstaff and the Merry Wives of Windsor’.

The play, Shakespeare’s only thoroughly English comedy, was written as a ‘Garter Play’ and is perhaps an enhancement of an entertainment originally offered at the Order of the Garter Feast at Westminster on 23rd April 1597. Sir John is the anti-hero of the play now known as ‘The Merry Wives of Windsor’. He seriously contravenes the chivalric code of the Order, and is duly humiliated (three times) at the hands of the Merry Wives. The play creates the impression of life in an English provincial town. ‘It provides a contemporary [to Shakespeare], domestic and non-aristocratic feel unique in Shakespearean drama.’ It is also one of Shakespeare’s funniest plays. The sub-plots enhance the humour of Sir John’s adventures: the come-uppance of the jealous husband Ford / Brooke; and of course the trials and tribulation of a loving couple as the heroine resists the attentions of less acceptable suitors and tries to marry her true love.

We hope you will come to laugh and enjoy the performance of the play ‘en promenade’, in the gardens of Traquair.

Many of our plays have included music, much of which has been especially written by our talented musicians.  In the Merry Wives of Windsor our musical director, together with the Shakespeare at Traquair Recorder Band wrote and played some beautiful music. These were played live in all of the performances, but we also recorded them too.

Bird on a Briar