Look through photographs from the performances of The Tempest. 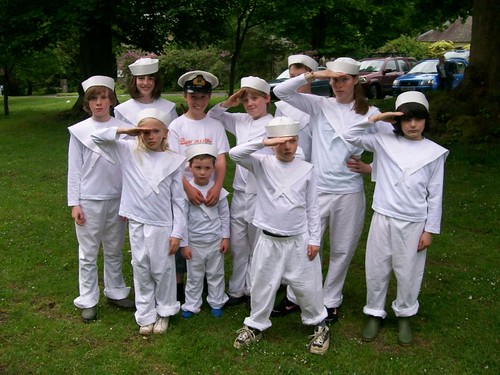 On Shakespeare’s birthday (23rd April), Shakespeare at Traquair are pleased to unveil this year’s promenade production of The Tempest.  The play, which opened Shakespeare’s First Folio when it was published in 1623, is by some critics considered to be his most autobiographical play.  It is also considered to be one of his best-loved plays.  And what drew us to this play?  Magic, of course!  And also: themes of supernatural, great exploration and discovery… and have we mentioned magic?  Quite simply, those are the themes that best summarise Shakespeare at Traquair’s over a decade-long journey of discovery of the great grounds of Traquair House.

Those, who have accompanied our journey over the years know that expecting the unexpected is the best way of approaching our annual productions.  This year is not different, even for the cast and production team (how are we going to bring a ship to a land-locked location?!)  Also, you can be prepared for the most vibrant, varied, energetic and surprising portrayal of Ariel (let’s say, we had a huge amount of candidates for the part and we haven’t had the heart to say no to anyone).  And, for us, Prospero will be a modern man who substitutes magic with science… or does he?  Well, you will just have to find out yourself.

The sorcerer Prospero, rightful Duke of Milan, and his daughter, Miranda, have been stranded for twelve years on an island, after Prospero’s jealous brother Antonio – helped by Alonso, the King of Naples – deposed him and set him adrift with the three-year-old Miranda. Prospero secretly sought the help of Gonzalo and their small and shoddy boat had secretly been upgraded to be more than sea worthy, it had been supplied with plenty of food and water, it had an excellent library and contained surviving material in case the boat capsized. Possessed of magic powers due to his great learning and prodigious library, Prospero is reluctantly served by a spirit, Ariel whom he had rescued from imprisonment in a tree. Ariel was trapped therein by the African witch Sycorax, who had been exiled to the island years before and died prior to Prospero’s arrival; Prospero maintains Ariel’s loyalty by repeatedly promising to release the “airy spirit” from servitude, but continually defers that promise to a future date, namely at the end of the play. The witch’s son Caliban, a deformed monster and the only non-spiritual inhabitant before the arrival of Prospero, was initially adopted and raised by the Milanese sorcerer. He taught Prospero how to survive on the island, while Prospero and Miranda taught Caliban religion and their own language. Following Caliban’s attempted rape of Miranda, he had been compelled by Prospero to serve as the sorcerer’s slave, carrying wood and gathering pig nuts. In slavery Caliban has come to view Prospero as a usurper, and grown to resent both the magus and his daughter for what he believed to be their betrayal of his trust; Prospero and Miranda in turn view Caliban with contempt and disgust.

The play opens as Prospero, having divined that his brother, Antonio, is on a ship passing close by the island (having returned from the nuptials of Alonso’s daughter Claribel with the King of Tunis), has raised a storm (the tempest of the title) which causes the ship to run aground. Also on the ship are Antonio’s friend and fellow conspirator, King Alonso, Alonso’s brother Sebastian, Alonso’s royal advisor Gonzalo, and Alonso’s son, Ferdinand. Prospero, by his spells, contrives to separate the survivors of the wreck into several groups and Alonso and Ferdinand are separated, and believe one another dead.

Three plots then alternate through the play. In one, Caliban falls in with Stephano and Trinculo, two drunken crew members, whom he believes to have come from the moon, and drunkenly attempts to raise a rebellion against Prospero (which ultimately fails). In another, Prospero works to establish a romantic relationship between Ferdinand and Miranda; the two fall immediately in love, but Prospero worries that “too light winning [may] make the prize light”, and so compels Ferdinand to become his servant so that his affection for Miranda will be confirmed. He also decides that after his plan to exact vengeance on his betrayers has come to fruition, he will break and bury his staff, and “drown” his book of magic. In the third subplot, Antonio and Sebastian conspire to kill Alonso and his advisor Gonzalo, so that Sebastian can become King. They are thwarted by Ariel, at Prospero’s command. Ariel appears to the three “men of sin” as a harpy, reprimanding them for their betrayal of Prospero. Alonso, Sebastian and Antonio are deeply affected while Gonzalo is unruffled. Prospero manipulates the course of his enemies’ path through the island, drawing them closer and closer to him. In the conclusion, all the main characters are brought together before Prospero, who forgives Alonso (neglecting to mention his brother’s betrayal of him or Sebastian’s attempted betrayal of Alonso) and finally uses his magic to ensure that everyone returns to Italy. Everyone leaves the island apart from Caliban and Ariel who are both left to see who will be Prospero’s successor of the island.