Look through photographs from the performances of Macbeth. 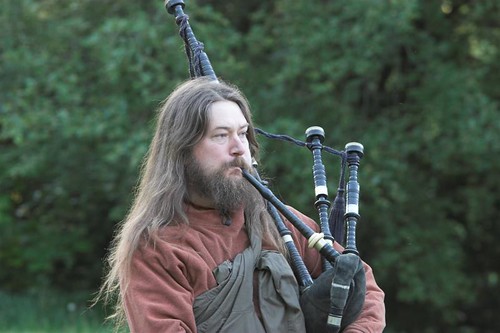 Summary of the Play

Shakespeare’s Macbeth tells the story of a man tempted to murder his king. He knows this is wrong, and that the consequences may be disastrous. He tries to resist temptation, but urged on by his wife, and ambitious for the kingship, gives way. Once the murder is committed and the kingship gained, the moral disintegration of Macbeth begins.

Lady Macbeth is ambitious and wants her husband to be king. She urges him to commit the murder. She does not foresee that the guilt that arises from the deed will lead to the downfall of them both.

The Weird Sisters foresee Macbeth’s fate, and tantalise him with predictions and visions that encourage him to take the disastrous actions which lead to his destruction.

The tragedy of Macbeth is Scotland’s tragedy. The murder of Duncan is not only the murder of an innocent man, but also the destruction of the trust essential to hold the community together. Once they realise this, the Scots re-group and take the only action possible to restore that trust.

Macbeth and His Wife

Director, Richard Forsyth, leads the cast around the grounds to describe each scene as the rehearsal schedule for Macbeth gets underway at Shakespeare at Traquair.

This year’s Shakespeare at Traquair is a new version of that old favourite, Macbeth. Husband and wife team, Richard and Fiona Forsyth, are directing the dark machinations of the tortured Macbeth’s, whose dealings with the occult and political assassinations result in paranoia and mental meltdown.

It is apt that a married couple are moulding this drama, much like Macbeth and his Lady wielded their might to manipulate their way to the throne. The Forsyth’s, however, will no doubt reach a pinnacle of glory because of a great cast who trust them and their vision. While we are not party to the plotting that goes on at the Forsyth’s home, it is certain that at Traquair no blood will be shed on this production!

Fiona is focusing on the Macbeth and Lady Macbeth scenes and developing the texture of their relationship, while Richard is more concerned with the political power struggles within the play. “Richard and I discuss the play in depth, when we are at home,” explained Fiona, “and we spark off ideas together. Of course, we may determine the overall creative direction but Douglas Roberts and Fiona McLeod are key players in directing and choreographing the large children’s cast. And, of course, the core actors at Traquair are experienced and imaginative so the final version is a large collaboration between us all, with Richard and I selecting the best of everything. It is hugely satisfying.”

This is not Shakespeare at Traquair’s first version of the Scottish Play. It was performed at Traquair back in 2000. Richard Nisbet was the director then (he plays Duncan this time) and his focus was a marching army from the Bear Gates and a Macbeth who emerged from a foggy Quair burn to stagger upon sixteen punk witches. At the time it received excellent reviews. It will be interesting to see how this compares as the company of players have grown and expanded.

Thirty youngsters are taking part in this year’s promenade performance of Macbeth at Traquair. Since its inception 17 years ago, the number of children involved has steadily increased.

This is something which founding member, Richard Nisbet, is justly proud. “I strongly believe in the benefit of all ages working together. Children can observe acting techniques in adults and learn almost subconsciously what is required for outdoor performances. In addition, the plays themselves are enhanced by directors having to creatively include a cast of youngsters, not necessarily scripted. The outcome has been that we have a team of directors and choreographers working on different aspects of the plays. This year Douglas Roberts, Tom Hudson and Fiona Mcleod are working with the children to ensure their presence is high quality and substantial.”

Youngsters who have cut their teeth at Shakespeare at Traquair include such professional actors as Zoe Hunter who is currently rehearsing with the National Theatre of Scotland. She took part in several Shakespeare productions when she was still at school. Roisin Taylor is another success story: she is now studying theatre arts in America.

Shakespeare at Traquair is building up a youth fund to support youngsters who ultimately want to pursue a career in acting like Zoe and the committee hope that youngsters will benefit from their involvement in the annual Shakespeare productions long-term.

Kath Mansfield, a member of the group and a mother who brought her own children along is enthusiastic about the productions. She told us, “What makes Shakespeare at Traquair special for the children is the space. They don’t have to keep silent in the wings or keep quiet during the rehearsals. When they are not performing they can go back to the central point and be with the gang. It is very social. Also it is a beautiful place to rehearse and the kids can play in the grounds when not on scene. This is great for their social skills as well as breaking up the leaning process. I think it is a wonderful experience for children and adults alike. My own son is now waiting for an audition to go to Telford College to study acting.” Kelso High School will be bringing students along to the performance this year. We encourage schools to attend, so please get in touch with us if you would like to bring a party of school children.

Messing about at Macbeth

Outdoor rehearsals are proving fun for Macbeth and his men this summer. There seems to be a competition on the lost teeth front with both Scott Noble and Richard Nisbet discarding their crowns in a bid to portray the authentic bad dental hygiene of the era! Of course, Richard Nisbet’s character, Duncan, does lose his crown to Macbeth in a brutal and bloody murder. There is long hair and a beard from Richard Potter (his usual look) and maybe a bit of dirt, grime and stubble would not go amiss – though not among the audience who will play their part this year.

On the female front, the chilling screams of Lady Macduff (Jo Dube) and her brood of babes are ripping through the Sunday tranquillity of the Traquair House gardens while Donna Vandenberghen is word perfect and emotionally charged as a manipulative and troubled Lady Macbeth.

Wicked witches in the woods … that’s what you’ll find at Traquair House this June. Pictured here are Carol Norris from Galashiels as a witch and newcomer to Shakespeare at Traquair, Jacques Kerr (Macbeth). Jacques is relishing his role as the complex and difficult Macbeth. “The settting at Traquair is stunning and lends itself perfectly the play.” Jacques told us. “I am really enjoying working outdoors with such a committed cast. It gives me a chance to interact closely with the audience and truly bring the story alive.”

Jacques trained at the RSAMD (MDra) in 2000 and since then the majority of his acting work has been in TV: Taggart, Life Support, River City, Rebus and Tinsel Town. Of his stage appearances, he claims his overriding aim has been to, “Say the lines and not bump into the furniture.” Most recently he played Creon in the sellout Edinburgh Fringe production of Antigone, a task which called for more than words in the right order and the ability to walk and talk.

No doubt, Jacques Kerr will prove a very satisfying Macbeth in this latest Shakespeare at Traquair production. It will certainly be worth checking out.

June has arrived and outside this Tuesday morning is grey skies and persistent rain! Hey, ho! Beltane and Shakespeare at Traquair, both scheduled for the midsummer days, can never rely on the Borders’ weather.

However, the vast community project that is Shakespeare at Traquair had a splendid dress rehearsal on Monday evening with Macbeth. Matt Davies, as MacDuff, is poignant and outraged in his grief; Carol Norris as the elderly weird sister is deliciously strange and unsettling; David Bon as the man of few words is grotesquely cruel and sinister and Tom Hudson (Old Man) looks every bit the homeless hobo of the eleventh century. As for Lady Macbeth and Macbeth himself (Donna Vandenberger and Jacques Kerr) they are passionate and convincing as a pair of schemers who find their own scheming so unpalatable it ultimately destroys them.

Yet it is not the individual acting that impresses so much as the sum of the whole. The techies on this project (around 20 of them) quietly create costumes; strange make-ups, false beards, facial sores and blood-dripping gore; banquets to tempt a king and all manner of props fashioned out of plant pots and footballs into unrecognisable effigies. A team of stage managers from all walks of life (students, unemployed, full-time mums and university lecturers) run the entire grounds leaving props in place, arranging furniture and creating soundscape for the actors to effortlessly utilise to tell this gripping tale. The prompt (Rosemary Donald) has patiently and kindly coaxed the words along for weeks and now hopes to be redundant. And a group of women from Eddleston, and the Hope Group of St Joseph’s, knitted (whilst drinking wine) to ensure an army of men were kitted out for the event.

As a city girl, I moved here seventeen years ago, slightly apprehensive about village life and the prospect of there being little to do. How wrong can you be? The Peebles Arts Festival, the Innerleithen Music Festival, Tweed Theatre, Odd Productions, Music in Peebles and many more arts activities are all co-existing happily and fruitfully in this locality. The community spirit and creativity is boundless in this corner of the world. (Kath Mansfield June 2010)