Promenade performance in the grounds of Traquair House.

Our promenade production in 2016 revisited The Taming of The Shrew, which we last performed in 2002.  Boyd Wild, a stalwart of our company, directed.  The play had a broad Gypsy theme to it and included a special written induction scene directed by Tim Wilcock, which stars our youngsters.

Slide show of Taming of the Shrew 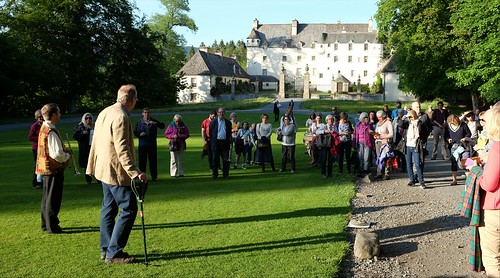 Download a PDF of our Taming of the Shrew Poster

To modern audiences, The Taming of the Shrew can present a deeply problematical dilemma, which centres on the relationship between Petruccio and Katherina. How is it that a woman who, by current standards, appears perhaps to be a little too forthright and assertive, but not unusually so, submits to the demands of a seemingly domineering and misogynistic suitor?

Indeed, there are hints of discomfort even in Shakespeare’s day. John Fletcher, Shakespeare’s successor as house playwright for the King’s Men, wrote ‘The Tamer Tamed’ as a sequel to Shrew in which Petruccio remarries after Katherina’s death, whereupon the new wife proceeds, successfully, to tame him!

So how do we get round this problem? There are I think three main solutions. Firstly, it can be played as a straight Elizabethan period piece, where a wife is owned solely and wholly by her husband and must obey his every command unquestioningly. Given that Katherina would have of course, been played originally by a boy, I am not convinced it would ever have been performed thus.

Alternatively, it can be played ironically, so that after

Katherina’s final speech in which she chastises the other women present for not obeying their husbands and pledges unyielding fidelity to Petruccio, she might for example turn to the audience and give a knowing wink as if to say ‘yeah, yeah as if!’.

There is I think a third possibility that is worth exploring and that is their behaviour can to a greater extent be understood if they just lust after each other. It is an instant and electrically animalistic attraction that transcends both reason and common sense. They will endure virtually any cruelty and privation to get the object of their desires between the sheets! Yes, they are both proud and stubborn and yes neither is going to give way to the other without a battle, but now it becomes much more a battle of equals.

This is the approach I have chosen to adopt and moreover, it is one that allows the broad comedy to shine through, whilst simultaneously camouflaging some of the darker and crueller elements of the piece. It also allows Petruccio and Katherina to be essentially likeable people, not without their faults, but recognisably, of us.

I have also decided to adopt a broad gypsy theme to the show. I think this enables all the passion, colour and hot-headedness that is required and also gives Chris Dubé, our Director of Music, a suitably fervent canvas upon which to compose and adapt his music for the play.

So there will be music and singing and humour and sauciness and above all enjoyment.

If this all sounds like fun then I can assure you it will be. Please come and see the show, the dates are at the top of the page.

We ran a couple of indoor workshops for some of the crucial scenes before we ventured outdoors to the beautiful if chilly grounds of Traquair House. We are lucky in that all our rehearsals can be held ‘on stage’ as it were, in the locations that we will eventually perform them rather than a distant rehearsal room. This has huge and obvious advantages when working out the moves and the staging, both for the actors and the director in that we can see immediately if a scene is going to work or not. The flip side is clear from the photos – all involved need to wrap up very warm. We have rehearsed in a blizzard before now, not something your average West End performer has to cope with!

Boyd is keen to incorporate much music and dancing as well as lots of high energy acting (I’m hoping it will be that kind of show), so there should be plenty on offer to suit all tastes and skill-sets. Audtions for both the children and adults (roughtly age 14+) occurred in early January.  Around 30 children will be in our production. They starred in the Induction scene, rewritten and directed by Tim Wilcock, as well as in the main play.